Pitogo High School once again dominated the playing field with its do-it-all robot to secure the best win-draw-loss record at the end of eliminations and be crowned as the Best Team, while the duo of Malabon National High School and Caloocan National Science High School emerged as the Best Alliance in the recently-concluded 2019 Tagisang Robotics: Design, Build and Play Competition held on November 19-20 at the Philippine International Convention Center, Pasay City.

Pitogo HS, which won as Best Rookie Team and Best Team in 2013 and again as Best Team in 2014, showed no rust and proved among the 16 school teams that they are still the team-to-beat in the returning robotics competition. However, they failed to advance to the final round where the fourth ranked alliance of Malabon NHS and Caloocan NSHS shocked the top three pairings to emerge as victors. 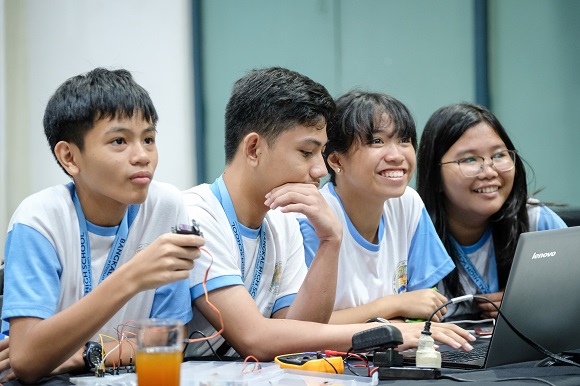 207 Qualifiers of the Bangon Marawi Program on STHRD signed the Scholarship Contract as they begin their journeys as DOST Scholars to help Marawi City get back on its feet.

Two years since the siege, Marawi City is onwards to its full recovery.

Providing a boost to its resurgence is the Department of Science and Technology – Science Education Institute’s (DOST-SEI) Bangon Marawi Program in Science and Technology Human Resource Development (STHRD), which recently awarded a total of 207 scholarships in the undergraduate and graduate levels for students from the city.

A total of 177 Bachelor of Science (BS), 27 Master of Science (MS), and three Doctor of Philosophy (Ph.D.) qualifiers under the Batch 2 of the Bangon Marawi Program in STHRD was approved by DOST Secretary Fortunato T. de la Peña last September 5, 2019. Most of these qualifiers then signed the Scholarship Agreement on October 16 at the Mindanao State University – Main Campus in Marawi City. DOST-SEI Director Josette Biyo in a photo op with officials from C&E Publishing and the student innovators who will compete in this year’s imake.wemake competition.

15 senior high school teams from public and private schools in the country were selected to participate in the five-day training/workshop on Arduino programming on September 9-13, 2019 at the Century Park Hotel in Manila.

The event is part of imake.wemake, an innovative technology project contest organized by the Department of Science and Technology-Science Education Institute (DOST-SEI) in partnership with C&E Publishing, Inc.